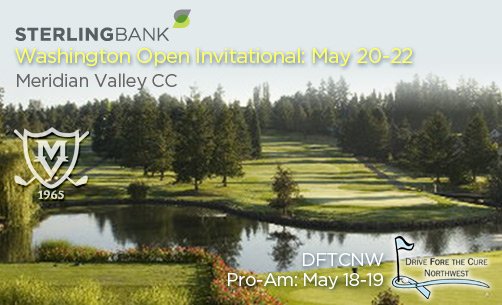 The Sterling Bank Washington Open Invitational dates back to 1922.  In that year, young Al Espinosa captured the crown at Yakima CC.  Some big names have won this event over the years including the Zimmerman brothers, Al and Emery, along with Chuck Congdon, Al Mengert, Senior Tour Player Rick Acton and PGA Tour Player Fred Couples.

This will be Meridian Valley CC’s seventh time hosting the Washington Open Invitational – hosting in 1972, 1976, 2002, 2004, 2005, and 2009.  They also hosted the LPGA SAFECO Classic from 1982 through 1999.  MVCC has grown into one of the Northwest’s most respected golf courses to the credit of the founding members who successfully achieved their goal to develop a first-class golf club.

CLICK HERE to view past champions of the Sterling Bank Washington Open Invitational.

Results will be posted at regular intervals throughout the day at https://www.pnwpga.com/pdf/resultswa13.pdf   “Almost live scoring” will begin at 10:00 am each morning after the groups begin turning.  Be looking to see if one of your friends posts a low score!