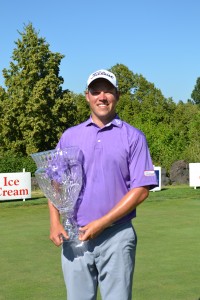 SPOKANE, WA – Corey Prugh of Manito G&CC won his third Rosauers Open Invitational title thanks to a final round 67 and 14 under par, 199 total. Prugh birdied #17 to take the outright lead and managed a cozy par on #18 to beat amateur Rob Seibly by one.   Seibly became the first back to back low amateur with a final round 64, 30 on the back nine thanks to an eagle-birdie finish. Kyle Kelly, Shane Prante and Matt Cowell finished two back at 12 under par.   Prugh is an assistant at Manito G&CC in Spokane and Seibly is a member of the same club.

The official charity of the Rosauers Open Invitational is Vanessa Behan Crisis Nursery. Proceeds from the event will benefit the Vanessa Behan Crisis Nursery, Spokane’s safe haven for children at risk of abuse and neglect. The Nursery also provides counseling, education and referrals for parents of young children. This year’s event raised $125,000 for the charity; over $2.35 million has been raised over the years. To learn more about the charity or to make a donation, please visit http://www.vanessabehan.org 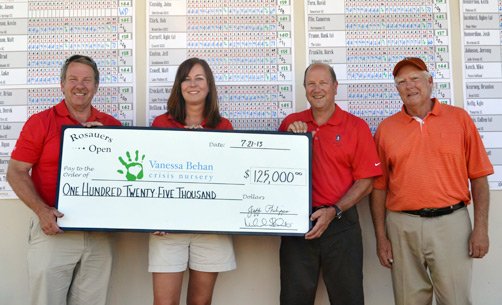 Since 1988, The Rosauers Open Invitational has been a part of the Pacific Northwest Section’s history.  The famed golf tournament has been hosted at one of Washington’s most desired places to play, Indian Canyon GC in Spokane, WA.  Open to the public, IndianCanyon and its Head PGA Professional since 1984 Gary Lindeblad, have treated the Spokane community with one great golf tournament after another.  Lindeblad even surprised the hometown fans with a victory of his own back in 1990, which is a rarity to golf tournaments played on your own home golf course.  This will the twenty-fourth year of the Rosauers Open Invitational.  PGA Professional Corey Prugh of Manito G&CC holds the current scoring record of 192 that he set in 2009.  This is the 26th anniversary of the Rosauers Open Invitational.

Spokane’s highly touted Indian Canyon has enjoyed rave reviews throughout its history.  Indian Canyon was built in 1935 for $200,000.  H. Chandler Egan, a member of the PNGA Hall of Fame, crafted the Canyon’s layout over the well treed hillside southwest of the Spokane River.

This municipal track has been annually rated among Golf Digest’s “Best Public Courses”, “Best Affordable Courses”, Best Golf Courses You Can Play”, “Best in State”, and taken individually, some holes rank with the best holes found on any course – public or private – in the region.  It is a golf course anyone can play!