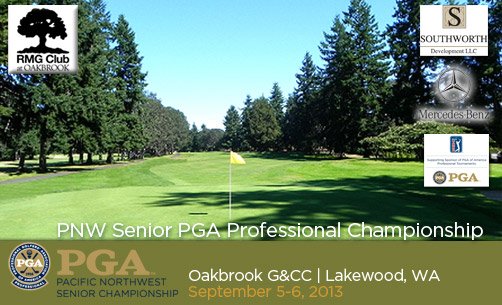 We are still accepting entries for our Senior PGA Professional Championship at Oakbrook Golf & Country Club in Tacoma, Washington. The event will be held Thursday-Friday, September 5-6.

The Senior PGA Professional Championship was established in 1952. Back then, the championship was held at the Yakima Elks’ G&CC with only 21 professionals battling it out for the mere sum of $920 dollars. The famous Bob Duden won the championship six times during the 70’s and seven times overall. Today this is a popular event for Section seniors.

Last year, Chuck Milne of Vanco Driving Range won the PNW Senior PGA Championship by two strokes over Jeff Shaw (Seattle, WA).  Milne posted a final round of 66 to come from behind for his second title. He previously won this event back in 2000.

Oakbrook Golf & Country Club first opened in 1964 as a private club with John Steidel redesigning the original holes in 1990.  Famous for having the best greens around, it’s sure to be a treat for anyone who appreciates firm, smooth, and fast greens.

On January 1, 2012, Oakbrook sold to an investment group who changed this formerly prestigious private club to a public golf course.  Oakbrook has hosted the PNW PGA Washington Open Invitational in 1970, 1975, 1982, and 2001, the 2003 Hudson Cup tournament as well as the PNGA Amateur in 2005.

Reminder – the Senior PGA Professional Championship has Senior Hudson Cup points (worth 1.5 times the normal value) and Senior Player of the Year points!  Plan on playing!

Seniors – hope to see you in September at Oakbrook G&CC!