The top finisher from the Pacific Northwest Section was Corey Prugh, finishing tied at 18th with a total score of 288. 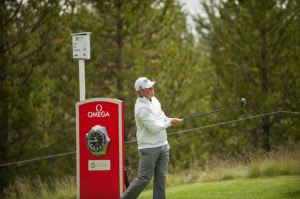 Corey Prugh watches his shot on the 1st hole with the Omega Clock in the background during Round 3 of the 46th PGA Professional National Championship at Crosswater Club at Sunriver Resort on Tuesday, June 25, 2013 in Sunriver, Oregon. (Photo by Montana Pritchard/The PGA of America)