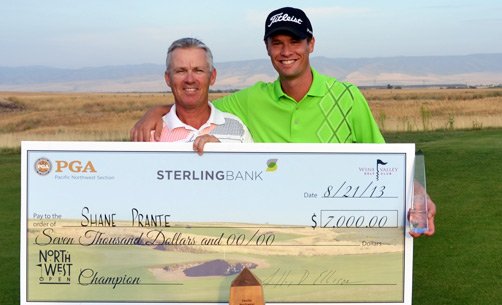 PGA Professional Shane Prante of Tom’s Golf Center (Olympia, WA) won the Northwest Open Invitational at Wine Valley GC thanks to a bogey free final round 67 to post 14 under par and win by six shots over PGA Professional Corey Prugh of Manito G&CC (Spokane, WA) and amateur Matt Rawitzer of Belliingham G&CC (Bellingham, WA). Prugh fired 68 and Rawitzer tied the low round of the tournament with his 66. Prante takes home $7,000.00 for his victory.

(if the results do not appear updated, you may need to clear the cache on your browser)

The early years were dominated by Seattle Golf Club’s Robert Johnstone (who won 8 of the first 10 events) and “Long Jim” Barnes.  Barnes, the professional at Tacoma C&GC from 1911 – 1915, won the first two PGA Championships (1916, 1919) in addition to the 1921 U.S. Open and the 1925 British Open!  Spokane’s Marvin “Bud” Ward captured six championships over a 22 year span, five as an amateur and his last as a professional.  Bud was also a National Amateur champion and may have won a few more but for the lack of championships during WWII.