PGA Professional Jeff Gove, of the Nationwide Tour, claimed the 86th Washington Open Invitational title after posting his second straight five under par 66 for a three day total of 200, thirteen under par. Gove tied the tournament record set last year by Tim Feenstra. Feentra of Broadmoor GC (Seattle) finished in a tie for second with PGA Professionals Corey Prugh of Manito G&CC (Spokane) and Jeff Coston of Semiahmoo G&CC (Blaine, WA). This was Gove’s second Washington Open Invitational title along with his 1995 crown. 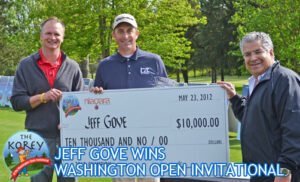 The Washington Open was established in September 1922 at Yakima Country Club.  When the championship was created it was tied in with the Washington State Amateur giving professionals and amateurs a chance to play with one another.  The events remained together until the 1950’s.  The Washington Open has accumulated an impressive list of repeat champions over the years.  History was made back in 1978 at Glendale Country Club when Fred Couples became the youngest champion of the event.  That historic year Couples beat Fred Haney, our 1975 Champion by one stroke.  Charles Congdon won five titles over four decades.  Al Mengert has won four times, including three in a row from 1963-65.  Long-remembered stand outs Bud Ward and Bob Duden have also had their fair share of the spotlight to name a few.  More recent repeat winners are 2010 Player of the Year Jeff Coston, the late Rick Acton, Jim Strickland, Chuck Milne, Don Bies, Todd Erwin and Keith Coleman.  The current tournament record is 200.  PGA Professional Tim Feenstra accomplished this feat just last year at Glendale CC.  He also won this event back in 2007.

The official charity of the Washington Open Invitational is Camp Korey.  CampKoreyserves children and their families from throughout the Northwest with serious and life-threatening illnesses at no cost.  The camp offers year-round recreation with full support for the medical needs of campers, plus all the fun of just being a kid.  To learn more about the charity or to make a donation, please go to www.campkorey.org