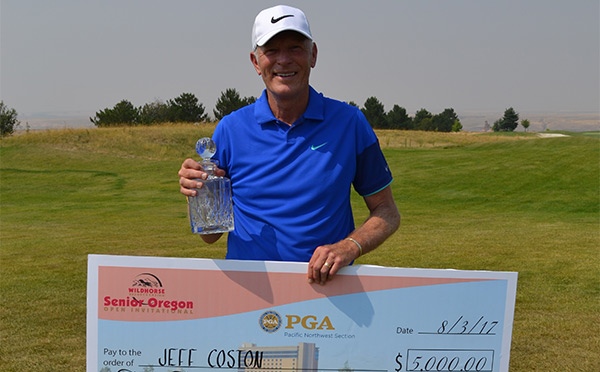 Wildhorse Resort and Casino is located at the base of the Blue Mountains in Pendleton, Oregon. Named ‘One of America’s Top Casino Golf Courses’ by Golf Digest, it is the perfect venue for our Senior Oregon Open Championship. This event draws the best players 50 years and older from all over the Pacific Northwest, and in 2017 they did not disappoint.

224 players teed it up on Tuesday, August 1, all with the hopes of hoisting the trophy after three rounds of competition. The first two days saw the individual stroke play competition, but also the concurrent pro-am competition. 56 teams lead by a PNW PGA Professional played in a best 2 of 4, one net and one gross format. The field battled a well-conditioned golf course along with some wind and hot temperatures. That didn’t seem to affect the team of PGA Professional Z Barbic (Gearhart Golf Links) and amateurs Doug Banks, Jeff Moenck and Richard Hamilton as they captured the 36-hole competition with an astounding 37 strokes better than par. Their victory was three strokes better than second place and earned them the title of 2017 Senior Oregon Open Pro-Am Champions.

The super senior division was also decided on this day, in which players 63 years and older qualify. PGA Professional Chuck Milne (Vanco Driving Range) took the honors with a 4-under par total.

Thursday, August 3 saw the third and final round of play. No more pro-am, no more team, just time to go out and win. PNW PGA Professional Jeff Coston (Semiahmoo G&CC) is no stranger to winning, having won four Senior Oregon Open titles in the past. He began play in the 3rd round with a one-shot lead over many strong players. He would need a strong finish to capture his fifth title. He fired a 10 birdie 62, no bogey final round to run away with the 2017 Senior Oregon Open Championship by eight shots.

When asked how it felt to win his fifth title, Coston responded, “I truly love to compete. I love to test myself and trust myself. I love to overcome interference and play in freedom. So that feels good. 62 feels good.”

Amateur Pat O’Donnell (Arrowhead GC) and PNW PGA Professional Scott Krieger (Broadmoor GC) finished tied for second with a three-day score of 8-under par. Another notable finish was 2016 Senior Oregon Open Champion Joe Carranza (Aldarra Golf Club) who shot a final round 64 to move him inside the top ten.

We’d like to thank Wildhorse Resort and Casino for their hospitality and continued support of our championship. 2017 marked the 15th straight year at Wildhorse Resort. Another thank you goes to host PGA Professional Mike Hegarty and his team for a well-conditioned golf course and continued help throughout the tournament. We look forward to returning to Wildhorse next year for the playing of the 2018 Senior Oregon Open Championship.