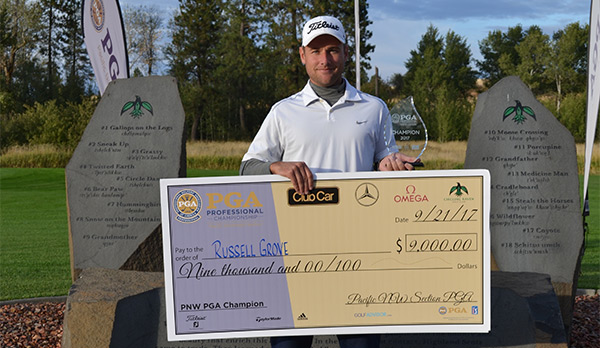 By Molly Cooper, PGA - Director of Tournament and Member Programs

Additionally, the low 20 scores at the 51st PGA Professional Championship will earn a place in the 100th PGA Championship at Bellerive CC in St Louis, Missouri August 16-19, 2018.

The field and purse were impressive! Because an amazing 122 PNW PGA members signed up for the PNW PGA Professional Championship, we played for an $86,000 purse and half the field was paid.

Competition was fierce and spots to advance were coveted. Comparing this win to his Oregon Open Invitational title won back in June, Gove said, “This one was definitely harder [during] the final round as both Brian and Jerrell put pressure on me early, and I think even felt behind at one point. The big difference, of course, being that this was a qualifier and that was my first goal was to get back to the PPC.” Grove qualified last year for his first National event after just earning his PGA Membership last June.

The win also cemented Grove's place as 2017 PNW PGA Player of the Year.

“Winning player of the year of course feels great as well. I was fortunate enough to be able to put myself in position a few times and if you do that enough good things will eventually happen. There are a lot of great players and great guys in the Section, so to receive that award is a great honor.”

Grove is a University of Idaho Vandal graduate. Ryan Malby and Ryan Benzel, who won this event at Circling Raven in 2006 and 2012 respectively, are also past college graduates of the program.

The Hudson Cup and Senior Hudson Cup Teams were also announced after the PGA Professional Championship.