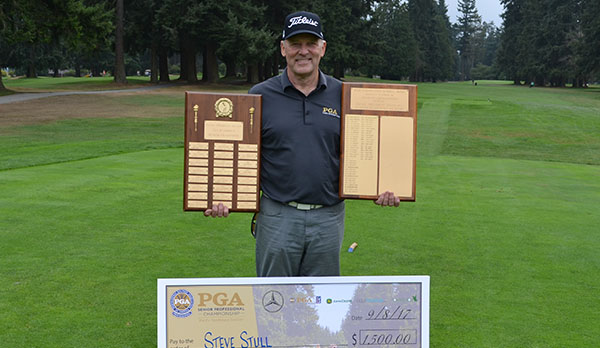 After making pars each on the first five holes of the playoff, Stull prevailed with a great birdie on the sixth hole to become the 2017 PNW Senior PGA Champion. “Tom Sovay is such a strong player I did not think I would win. When I made the final putt I could only think, ‘wow where'd that come from,’” said Stull of his win.

Participants entering through PGA National also qualified for the 2017 Senior Professional National Championship presented by Mercedes-Benz, where they will represent our Section on September 28-October 1 at Desert Mountain GC in Scottsdale, Arizona.. In addition to Stull and Sovay, Rick Fehr of Willows Run GC, Rob Gibbons of Arrowhead GC, Brent Murray of Oswego Lake CC, George Mack Jr of Black Butte Ranch and Joe Carranza of Aldarra Golf Club. Jeff Coston of Semiahmoo G&CC also will represent our Section as he was previously exempt.

Winning the senior division, played from a different set of tees, was PGA Professional Steve Reuhl of Bothell, WA. He won by three strokes over PGA Professional Kevin Bishop of Saint Martin’s University.

Steve Stull also captured the Hugh Starkweather award, which goes to the low player for both rounds that is 60 years and older.

The PNW PGA would like to thank PGA Professional Brent Webber and the rest of Everett G&CC staff for a wonderful week.