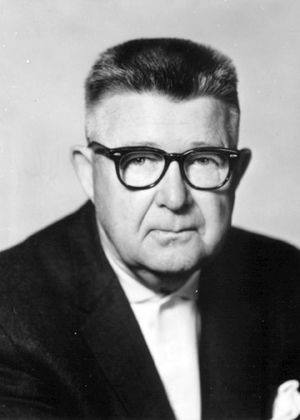 Ted spent the last 21 years of his career as the head professional at Waverley Country Club where he retired in 1953. He won the Oregon PGA five times (1935, 1941, 1944, 1945 and 1948), the Washington Open twice (1933 and 1937) and the Oregon Open in 1934. In addition to his five Oregon PGA victories, he had three-second place finishes in the tourney. Longworth started his professional career in Joplin, Missouri in 1923 and shortly thereafter moved to Fort Worth, Texas. He is best remembered for a couple of caddies he took under his wing in Fort Worth - Ben Hogan and Byron Nelson. Hogan was a natural lefthander until Longworth talked him into playing from the right side. Ted moved from Fort Worth to Texarkana, Texas, before taking the job at Waverley in 1932. 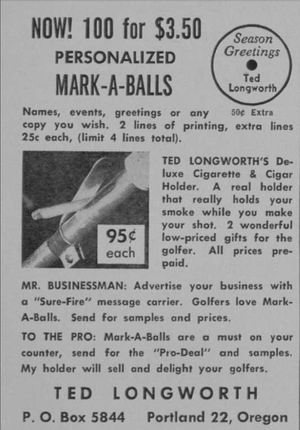 "I was born left-handed—that was the normal way for me to do things. I was switched over to doing things right-handed when I was a boy but I started golf as a left-hander because the first club I ever came into possession of, an old five-iron, was a left-handed stick. I stopped being a left-handed golfer for what might be termed local commercial conditions: the boys in my home town, Fort Worth, used to buy our golf clubs (at a dollar per club) at a five-and-dime store, and there simply never was any left-handed equipment in the barrel where the clubs were stacked. When I changed over to the right side, possibly as a hangover from my left-handed start I first used a cross-hand grip. I experimented next with the interlocking grip, and at length—I must have been about 15 at the time—I finally arrived at the overlapping grip. I was working then in the golf shop at the Glen Garden club, and I copied the grip of Ted Longworth, the pro. I recognized quickly that this was the best of all grips, and once I had persuaded myself of that fact, it took me only a short time to familiarize myself with it."