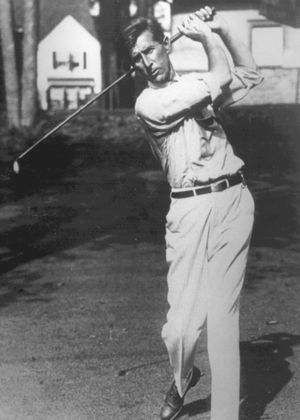 Born in Cornwall, England, Jim Barnes came to the United States in 1906 and became one of the world’s finest players. He won the first PGA Championship in 1916, defeating Jock Hutchinson in the final match, and successfully defended the title in 1919 after a two year lapse due to World War I. Jim won $500 and a diamond medal for each victory. He won the 1921 U.S. Open, defeating Walter Hagen by eight strokes at Chevy Chase Club, near Washington D.C., and the 1925 British Open at Prestwick Golf Club in Scotland. He was a four time champion of the Northwest Open. Jim was the golf professional at Tacoma Country & Golf Club from 1911 to 1915.