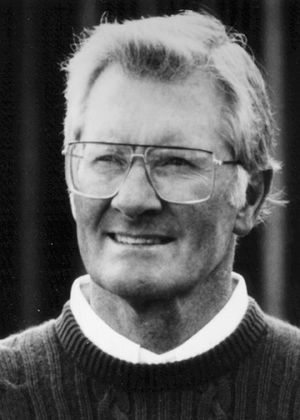 Following his 20-year career in the United States Air Force, George Lanning began his second career as an assistant golf professional at Oakbrook Golf and Country Club in Tacoma in 1969 and 1970. Later in 1970, he became the head professional at McChord Air Force Base Golf Club, then returned to Oakbrook as head professional in 1974. While at Oakbrook, George became well know for his work developing top junior players through his junior program. One of the finest left-handers in the nation, he resigned from Oakbrook in 1984 to join the Senior PGA Tour where he proved to be a consistent money winner. George was also active in the PGA, serving many offices in the Chapter and Section and concluding as Section president 1980-1981. He was the Section’s Horton Smith Award winner in 1980, and was bestowed with the Section’s highest honor, Golf Professional of the Year, in 1981.